These baby Macaques have been stolen from their mums & are waiting in a market to be sold.

In Indonesia, primates can often be seen sold on the streets or kept as pets, more often than not, they are suffering. JAAN can help rescue them when they are a protected species by the Indonesian law, such as Leaf Monkeys, Slow Lorises & Gibbons. But we find most often the non-protected species such as the Long Tailed and Pig Tailed Macaques. Then, it’s a matter of welfare. We can, when the conditions are very extreme, rescue the primates based on bad welfare conditions yet this is very challenging when the owner is uncooperative. Also, due to the fact that these primates are still not protected, the process of rescue, rehabilitation and release is extra challenging. Finding a safe release site is extremely hard.

There are hundreds for sale on the markets. And, for every monkey some one buys, a new one will be caught from the wild and torn away brutally from its mother. Sometimes people buy a monkey out of pity. But even with good intentions of ‘letting it go back into the wild’ in fact you are still supporting the trade and are directly responsible for another monkey being caught to replace it.  So therefore we strongly advise to not buy any primate offered for sale.

JAAN has a long waiting list of primates in need of rescue who are chained and caged. The problem is Indonesia has no regulations to protect these Macaque species! We strive to change this. We started by banning the Dancing Monkeys (Topeng Monyet) in Jakarta, and thankfully were able to stop this horrific cruelty.

Now we strive to push for a total ban to sell and keep primates all together. Pushing the Indonesian government to protect ALL primates is what we can do.

JAAN does not agree with any primate being kept captive! Primates are wild animals .. not pets #primatesarenotpets

Primates are highly intelligent with complex social structures; they find it particular difficult to adapt to life as a pet. The confines of primates leads to stereotypical (abnormal) behavior, such as pacing or even self-injurous behaviors including scratching, biting and hair pulling! The diet of captive primates is very different of their natural diet leading to malnutrition and often also diabetes! A usual situation that we see Monkeys that are being kept as pets, sometimes worse. A report that got sent to us reporting this Monkey being tied by the waste with no shelter & smoking cigarets.

The psychological damage that occures in primates that have been kept as pets is shown when they are handed over to sanctuaries. These naturally social animals are often afraid of their own kind and need long term rehabilitation and care to integrate them in to a natural group so they can live as they were meant to; with other monkeys. This process is very costly and a long commitment for the rescue centers taking in the rescued primates!

Pet primates pose also a risk to public health and safety. Primates establish dominance hierarchies as part of their natural behavior. When they are kept as pets, this can result in encounters where human family members are attacked, especially children.

As primates reach sexual maturity they may become unpredictable and aggressive and can inflict serious injuries through physical strength, scratches and bites. These injuries also carry high risks of disease.

But unfortunately its not possible for JAAN to rescue them all. So JAAN has now started to coordinate with reported primate owners to provide better welfare conditions while the primates are held captive. This is done by JAAN’s mobile Wildlife Team (Wildife Department) when not busy with raids and following up on post rescue care for confiscated animals. 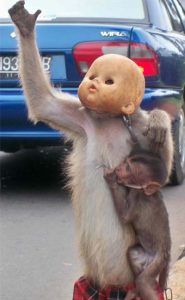