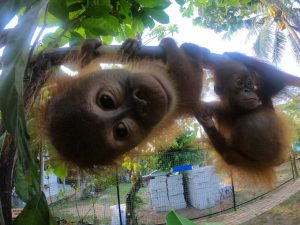 Our Sumatra Wildlife Center cares for confiscated wildlife and strives to rehabilitate them back to the wild. The center is located in the South of Sumatra and animals like sunbears, various species of primates, reptiles, birds all rescued pass through the center before we can release them back to the wild or provide them life long care if release is not an option.
Although we have worked with Governments, authorities, individual donors and other NGO’s to rescue animals from exploitation, run programs to help minimize wildlife extinction, work to halt the illegal animal trade, and to improve animal welfare in Indonesia. Until present, we have never owned a rescue center. We usually rent land on the locations we work or are provided land by the authorities.
We strive to react to all cruelty cases and animal related problems, throughout the country and assists in seeking solutions for welfare improvement for any animal species. Our team is assists government officials with confiscations of wildlife and during fast response actions to solve wildlife crime and provide good aftercare for confiscated animals so a wildlife center was very much needed and in 2018 finally we started construction! 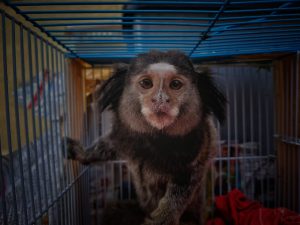 In 2019 the center opened its doors and since we have been very busy working together with local authorities to combat wildlife crime. Sumatra is the habitat of many endemic and endangered animals including the critically endangered Sumatran Tiger, Sumatran Elephant, Rhino, Orangutan (two species: The Sumatran Orangutan and the Tapanuli orangutan), the siamang gibbon, the agile gibbon, white handed gibbon, Thomas’ Leafmonkeys, the Sumatran slow loris and other endemic primate and other Sumatran Wildlife species.

Since February 2018 we initiated Indonesia’s first wildlife detection unit and the main operation ground for the K9 dogs is Sumatra. ‘Bailey; is our first wildlife detection dog and she has proved to be a true warrior for wildlife, rescuing many endangered animals smuggled in and out of Sumatra. We don’t publish much about the activities of these unit to keep it running effectively. We are very much in need for support for the unit, especially for aftercare for animals confiscated from the trade. These include mostly birds, thousands of them on a yearly basis, but also turtles, baby primates being smuggled and parts of animals too for the so called ‘chinese medicine’ trade. These animals all need to be rehabilitated !

We need to tackle this criminal and cruel trade, and we rely on your support to make this happen.